“When a sparrow tied by the leg tries to fly, it is held back by the string and pulled down to the earth. Similarly, when the intellect that has not yet attained dispassion flies up towards heavenly knowledge, it is held 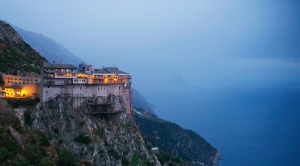 back by the passions and pulled down to the earth.”

Unless we achieve dispassion, St. Maximos tells us, we will be flapping our wings vainly— longing to fly but remaining stuck in place.  To achieve this dispassion,  he admonishes us to

‘Put to death therefore whatever is earthly in you: unchastity, uncleanliness, passion, evil desire and greed’

Maximos does not simply give us lists of sins to avoid and commandments to obey. He seems to be the master of nuance in drawing out cause and effect relationships among passions and  elucidating the dynamics of our perception and association with them.

Not all passions are the same. Maximos points to a synergistic relationship among them and a progression toward total immersion to sin..

Greed is the chief enabler among them and opens the floodgates for the rest of them.

Thoughts are the subtlest and, hence, most dangerous of the demons assailing us. “For the war which the demons wage against us by means of thoughts is more severe than the war they wage by means of material things.”

“Unchastity is his [St. Paul’s] word for the actual committing of sin. Uncleanness is how he designates assent to sin. Passion is his term for impassioned thoughts.”

Maximos points to our role in allowing sin into our souls by first “assenting to it, before actually committing it. .

“By evil desire,” he explains, “he [St. Paul] means the simple act of accepting the thought and the desire. And greed is his name for what generates and promotes passion.”

How many times have you caught yourself justifying something in your head or deciding to minimize its importance before you actually engage in it. “Probably health reports exaggerate the harm of smoking.”  “I know that technically the church considers it a sin but times have changed and we don’t live in the 1st century anymore.”  “It’s not the end of the world to tell a harmless little lie.”

en the passion is not eradicated, it persuades the intellect to assent to it. Once this assent is given, the actual sin is then committed.”

Maximos then goes on to describe how our intellect will see the world when it is free of passion and “proceeds un-distracted to the contemplation of created beings, making its way towards knowledge of the Holy Trinity.”

It seems that when we are weighed down by passions, we are unable to see the true nature of things. Our r vision is blurred and often deluded. But when we reach a “pure state, the intellect, on receiving the conceptual images of things, is moved to contemplate these things spiritually.”

What does this mean? “He who has succeeded in attaining the virtues and is enriched with spiritual knowledge,” Maximos says, “sees things clearly in their true nature. Consequently, he both acts and speaks with regard to all things in a manner which is fitting, and he is never deluded.”

In other words, that which we perceive through our senses and influence by thoughts that obsess us and habitual patterns of thinking, is not true or whole. It is only “spiritual contemplation of things visible” that “casts off impassioned conceptions of such things.”

Free of passions, our intellect “…searches out either the natural principles of these things or the spiritual principles which they reflect, or else it seeks their original cause.”

Could it be then, that when we see suffering and injustice around us as irreconcilable with God’s goodness, we are not seeing the spiritual principles and true nature of things? St. Maximos tells us that in a state of perfect love our “intellect is absorbed in the contemplation of things invisible” beyond what we see or hear with our senses. Instead of doubt, envy, fear or despair, “it seeks their natural principles, the cause of their generation and whatever follows from this, as well as the providential order and judgment which relates to them.”

Notice that the topic of this essay is love and yet nowhere in these pages does one find the kind of love we recognize as love, and that is “love” as emotion. Perfect love comes out of dispassion; the absence of personal agendas, the desire to control or manipulate or the delusion of senses.  It can occur when we can finally see the true nature of things and recognize God’s light in everything around us.

When the sun rises and casts its light on the world, it reveals both itself and the things it illumines. Similarly, when the Sun of righteousness rises in the pure intellect. He reveals both Himself and the inner principles of all that has been and will be brought into existence by Him.