Various Texts on Theology, the Divine Economy, and Virtue and Vice, Third Century, # 11-22 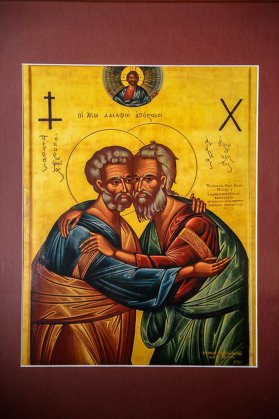 In existentialism, freedom is the ability of individuals to define their own meaning of life despite the absurdity of a meaningless universe. St. Maximos tells us that salvation is a process of reunification with God and that confining the world to the limitations and loneliness of one’s own self, is enslavement and death.

Far from being random and meaningless, the travails of the human condition are opportunities for cultivating humility, growing spiritually and coming closer to God.

For St. Maximos and other desert fathers, achieving victory over passions and adversities is not transformative unto itself. To affect transformation, events or actions must contribute to a fundamental reorientation of self, such as when we convert victory into gratitude. Instead of enabling fragmentation between ourselves and an absurd and capricious universe surrounding us, we experience unity with God and full participation in divine intelligence, when we acknowledge God’s help in achieving this victory.

Providence has implanted a divine standard or law in created beings, and in accordance with this law when we are ungrateful for spiritual blessings we are schooled in gratitude by adversity and brought to recognize through this experience that all such blessings are produced through the workings of divine power. This is to prevent us from becoming irrepressibly conceited, and from thinking in our arrogance that we possess virtue and spiritual knowledge by nature and not by grace.

When victory over passions or adversity increases our delusion of power and hardens us with arrogance, gratitude is replaced by a sense of entitlement and growing distance from God.

…For when conceit about one’s virtue is left undisciplined it naturally generates arrogance, and this induces a sense of hostility to God.

In Tolstoy’s War and Peace, charismatic Prince Andrei Nikolayevich Bolkonsky leads a life of reason and success yet one devoid of gratitude and joy. He rids himself of his habitual cynicism when once, on the battlefield, he gazes on the vastness of the night sky and is lost in contemplation. He senses the transformative nature of his encounter with a universe so much more enormous than himself and vows to change his life. But without accepting Christ and humbling himself to him, he misinterprets the signs, believing that he must now live for himself alone and not for others. As a result, he isolates himself further, hardens his heart and narrows his vision, losing his interest in war and politics and refusing to forgive his then fiancée, Nastasha Rostova, for her unfaithfulness.  It is only on his deathbed that his cynicism leaves him. He is suddenly filled with gratitude over Natasha’s tender nursing of him and forgives her. He sees his life as a gift and experiences love. After a dream in which death is revealed to him as an awakening to a new life, he dies peacefully.

St. Maximos sees ingratitude as fragmentation and gratitude as wholeness and union. Acknowledging the self as the ultimate authority and desired destination is tantamount to willingly locking oneself in a dark and narrow jail cell. Conversely, instead of being confining, true gratitude and submission to God opens the gateways to freedom.

Think about it. People, like organizations, become stale when self-satisfied and confident. In my experience as consultant, organizations that lacked curiosity about their customers and the outside world; were devoid of “hunger” and were indifferent to continuous learning and improvement, were those that stagnated and died. St. Maximos made similar observations about the state of our souls:

He who thinks that he has achieved perfection in virtue will never go on to seek the original source of blessing, for he has limited the scope of his aspiration to himself and so of his own accord has deprived himself of the condition of salvation, namely God. The person aware of his natural poverty where goodness is concerned never relaxes his impetus towards Him who can fully supply what he lacks.

He who has perceived how limitless virtue is, never ceases from pursuing it, so as not to be deprived of the origin and consummation of virtue, namely God, by confining his aspiration to himself. For by wrongly supposing that he had achieved perfection he would forfeit true being, towards which every diligent person strives.

In Eastern Orthodoxy we believe that man was originally created in communion with God and that the path to salvation is a continued journey toward theosis—union with God. Anything that disrupts this unending journey is an obstacle to salvation. St. Maximos tells us that ingratitude, and the belief that you are the sole author of your achievement, impedes the journey upward and returns us from the pursuit of life in God’s likeness to the isolation of a jail cell, inhabited only by us. Salvation is not achieved by our own will but though the grace of God. Gratitude for his grace fuels and re-energizes our journey, opens the gates to continuous spiritual growth and increases our desire for theosis.