In these paragraphs, St. Maximos elaborates on the relationship between the 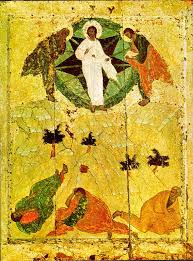 senses and the intellect.

The message on renouncing the senses and living a spiritual life is clear:

Yet Maximos goes beyond complete renunciation of the senses to their “redirection.”

Sin takes hold of our soul, not merely because the senses have a role in our lives but when the “senses naturally assume the dominant role.” And this occurs when “intelligence does not rule.”

Without the leadership of the intellect our soul is rudderless and prey to destructive thought and passions. It is vulnerable to being “diverted from a life lived in accordance with nature and is impelled to become the author of evil.”

“Nature” for Maximos then is not a neutral, blank slate. It is created by God and, hence, is inherently good. Consequently, sin is the result of forgetfulness of God’s goodness.

“Evil is the noetic soul’s forgetfulness of what is good according to nature; and this forgetfulness results from an impassioned relationship with the flesh and the world.”

By applying intelligence, we do not allow our souls to drift into forgetfulness and loss of control.

“When the intelligence is in control,” Maximos continues, “it dispels this forgetfulness through spiritual knowledge, since intelligence, having investigated the nature of the world and the flesh, draws the soul to the realm of spiritual realities which is its true home.”

In the framework Maximos lays out, the senses are not simply eradicated but put in the right place through spiritual understanding, so that “the link between the soul and the senses has now been broken, and the senses, limited to the world of sensible objects, can no longer function as a bridge conveying the law of sin into the intellect.”

To illustrate how this is done, Maximos recalls “those who are always dying to what is human – I mean human life in the flesh according to this present age – and living for God in the Spirit alone, after the example of St Paul and his followers.

The reason why these people, “bear everything with joy… even though they suffer much affliction, torment, distress and persecution, and experience innumerable forms of trial and temptation,” is that “they do not in any way live their own life but have Christ living in them.

That senses can become handmaidens of the spirit rather than pathways to sin goes beyond renunciation to point us to a bridge to deification.